Karamat grew up in Azad, Kashmir. His father migrated to the UK when Karamat was one, then returned five years later. Seeking a better future for Karamat, his parents sent him to Birmingham, in 1970, when he was 12. From a young age, he had a strong sense of justice and fairness. This stuck with him for the rest of his life. Today, he describes himself as a practitioner of education and equality and diversity.

From the early days I loved the diversity here. I found the more different the things were in UK, the more I fell in love with the country. In our village, music was never heard, it was sort of looked at as being lower class. A few artisans played certain instruments, but they were not professional. In the UK I fell in love with the music. I remember going to WH Smith. I walked in and asked a young white shop assistant if he could sell me some English music. He was confused, but then he pointed at the cassettes. I picked up one that was called Perry Como. It had a picture of a man on there, and I assumed that was the man that would be singing. The other cassette I picked up had a photo of what looked like a prism. It was Pink Floyd. I kept wondering why anyone would be called Pink Floyd. I bought both of them. I loved Pink Floyd but not Perry Como. I went back and bought another one called Crime of the Century by Supertramp. After this I really got into music. I listened to the radio – the Rock Show on BRMB by Robin Valk was a favourite – and I would watch Top of the Pops and the Old Grey Whistle Test. So, my passion for music continued from there.

The second thing that happened to me was discovering the library. I loved books and going to the library. The books that really inspired me are ‘To Kill a Mockingbird.’ I loved it because it was about justice. Also, there was a father figure in the book, I wished he was my father. I really missed my father […] I was around about fourteen at this time. The other book was John Steinbeck’s Grapes of Wrath, about migrants.

I got used to the differences pretty early on. I was conscious of the fact people were different, but I found that fascinating. I quickly saw beyond the colour of the people’s skin. I respected everyone. It was different that I went to a school where boys and girls mixed, the classes were mixed, not only in terms of boys and girls, but also, I was very pleased to have a Hindu and Sikh friend.

I experienced racism on my first day at school. A tall white boy lifted me up by my clothes, he pushed me up against the wall and said “We don’t want any more fucking Pakis here.” Some children went quiet and others laughed. There were also some Pakistani boys in my class. No one intervened. Later I became friends with some of the other class members. As time went on, I became more accepted. My interest in music helped here.

I left school at sixteen. I was still interested in education, so I got a job where I could take one day off in the week to go to college. None of my other Pakistani friends went onto further education, they all got factory jobs. I had to work because I had to stand on my own two feet but learning still interested me. Before I left school, I used to attend evening classes. I had to get a letter from the headteacher to be able to do this, as the classes are usually for adults and I was still at school. After leaving school, I studied for six years before going to university. The work I was doing during this period was as a clerk in a factory. I was working in an office. So, I went to work in clean clothes, which again was different from my friends as they worked in the factory in sometimes very dirty environments.

I started to become aware of Asian peoples’ needs at this time and I got involved with the Asian Youth Association in Birmingham. We set that up ourselves. It was Sikhs, Hindus and Muslims working together. I later promoted kabaddi for young people. We organised leisure and fun activities for young people on weekends. I would try to bridge-build between different communities and people. The kabaddi competitions had Muslims from Small Heath and Sikhs coming from Smethwick temples. 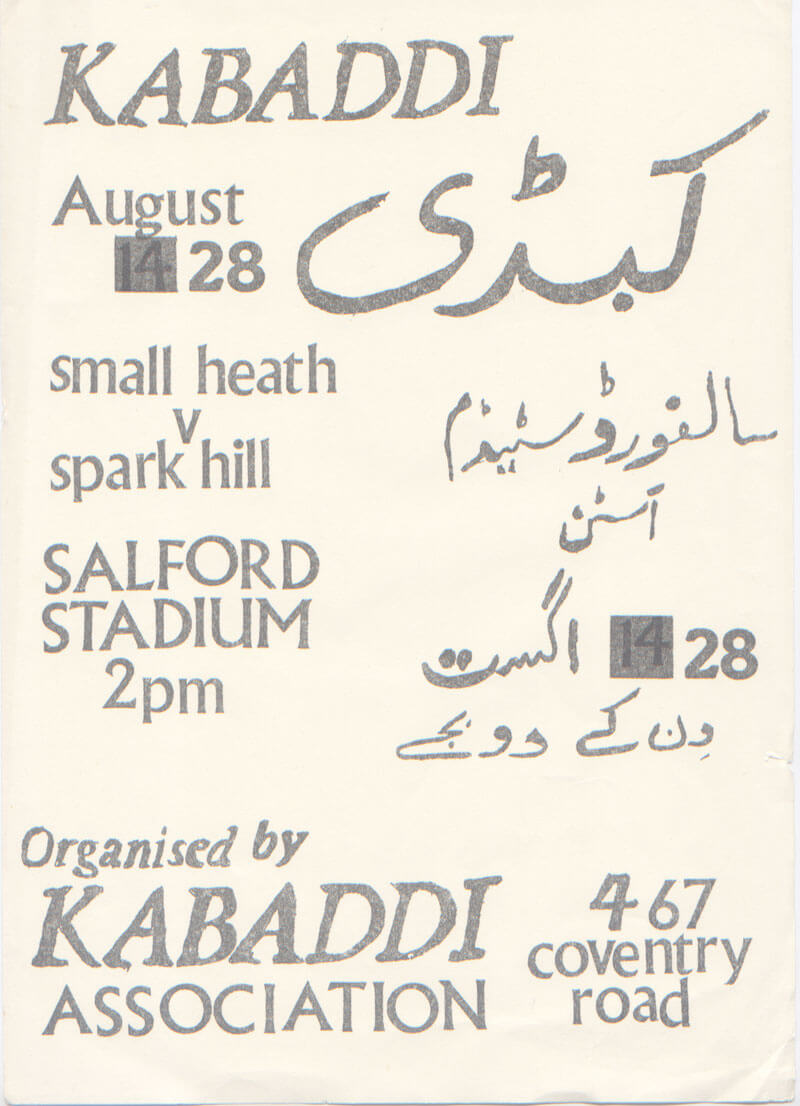 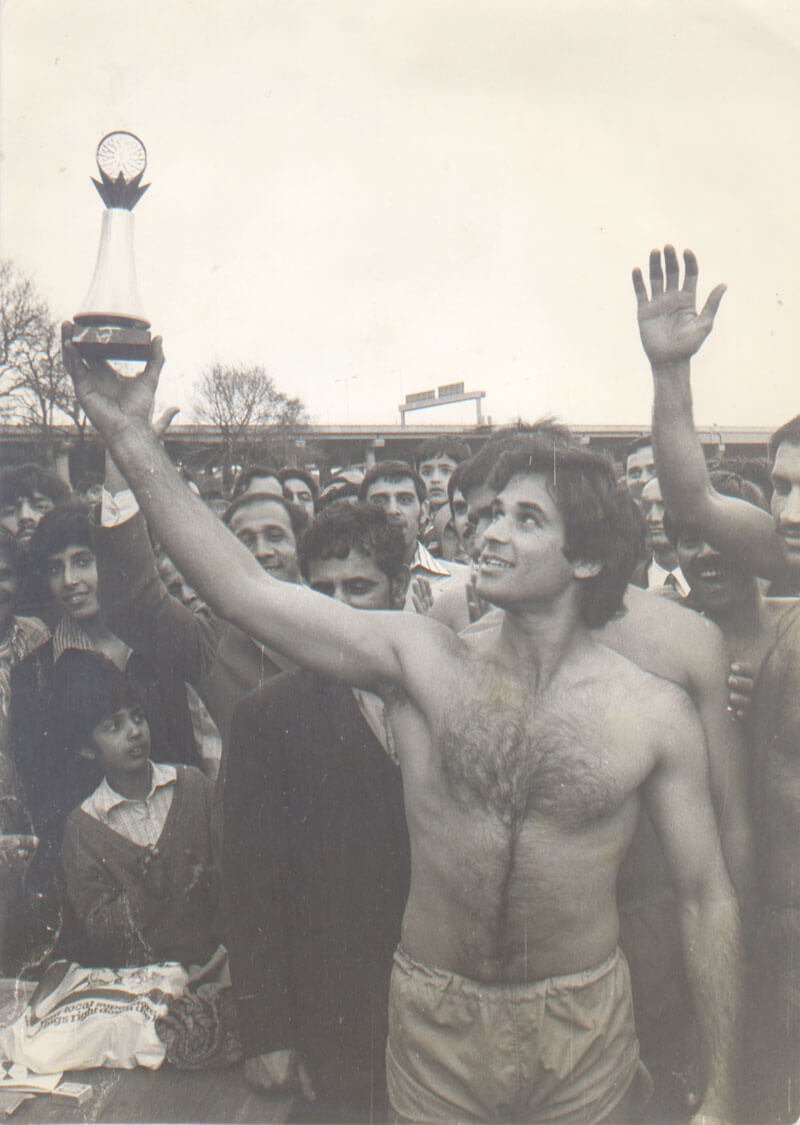 In my spare time I used to help out at Saturday school in Saltley and in the evenings in Nechells. In 1978 there was an opportunity to become a full-time youth worker for the council. I was age twenty. In this job I realised that there were a lot of white people working as teachers and social workers, but they did not have an understanding of Asian people that they were working with, so I set up a course called Asian Studies. I look back and think that was a brave thing to do, given my age. The Asian Studies course, was covered over ten weeks, I still have the folder. One week was covered by immigration, then the next week it was about Hindus, so a person would come in and do a talk. Then another week it would be about Bangladeshi people. Then one week it would be about young people. One of the sessions we had a talk by Ranjit Sondhi. This was about racism and the audience felt uncomfortable about it and wrote to me after to complain. I taught this course for five years. Teachers, social workers, probation officers, police officers and others came.

At the age of twenty I went back to visit my parents in Pakistan. My identity at this point had changed radically. I left as a boy who only knew his village. During my eight years in England, I had been transformed. I was brought up by my sister, who gave me all the freedom I wanted. There were times I wish she had not given me so much freedom, because I got myself into dangerous situations, I took risks. However, I had become a very different person after eight years, my parents had no idea who I was. They were proud that I had an education, but they expected their child back. They were also proud that I had a good job and that I had bought my own house.