Experiences of Asian youth often revealed commonalities wherever they were growing up. But sometimes, being in a certain place at a certain time resulted in unique experiences, perspectives and outlooks.

In 1965, at the age of five, Arif Chohan, travelled to Britain, with his mother and sister, to join his father. They settled in Ashton, where they had an idyllic life. His father ran two shops, a small poultry farm and even became involved in local politics (a big thing back then!). In 1972 the family moved to Salford, where life was very different:

We lived in Ordsall. Ordsall was the heart of the docklands in Salford. It was a predominantly overwhelming white area. I can’t remember any Asian family in the area. The experiences and memories of Salford are painful, simply because the racism we experienced on a daily basis was blunt. It was crude. It was harsh. We’d never lived in a dockland before. But we soon found out what living in a dockland was all about. We had a shop in Salford. A lot of the customers were wonderful customers. You couldn’t ask for better folk. Others were, you know, just pure nasty, outright racist. They couldn’t tolerate the fact that we’d moved into the area. We’d bought a property, you know, a shop in the area. We wanted to be part of the local community, but they couldn’t accept that. We were well known to the police and fire service because we literally had to call them out on a very regular basis. Local people would turn up with petrol and try to set us on fire. I remember our house, the shop, we had it all plumbed with hosepipes, so if the fire service didn’t turn up on time to save us at least we had enough hosepipes in the property to put the fire out.

But they were part of the community and accepted by many, too:

A lot of our customers weren’t just customers. They became family friends. Everybody loved my mum’s cooking. There was always something cooking at home and customers were constantly in and out of the dining room.

Growing up in Salford, without a significant Asian community, Arif did not have the chance to learn about his own cultural heritage:

One of the discussions I remember having in Salford, at home, was our parents talking about, you know, we’re Muslims, we’re Pakistanis. My father and mother were born in India. I didn’t know anything about our heritage, our culture, our language. We knew we were different, but how different we weren’t really aware of. I remember this one conversation where our parents said “We’re Muslims, we’re Pakistanis, we’re Indian, we were born in the Punjab. These are our languages. We speak Urdu, we speak Punjabi.” My parents spoke several other languages as well. They were fluent in Arabic, Farsi, as well as Hindi. At that time, the parents decided it was time for us to start learning something about our own background.

In 1975, when Arif was 15, his family moved to Acocks Green, Birmingham. It was more ethnically diverse, a stark difference to where he had lived before. His experiences in Salford and Ashton were so formative that he struggled in his new surroundings:

I was known as a coconut. Brown on the outside, white on the inside.

At school in Birmingham, he soon made an impression, organising trips and getting involved in youth groups. While in sixth form he visited the Birmingham Federation of Boys Clubs in the Lickey Hills. This had a lasting impression on him and was the beginning of a lifetime commitment to work with young people:

I used to attend the Birmingham Community Relations Council meetings as a teenager. And I got involved with their various activities. Being a young lad myself, we set up, with the help of the Birmingham CRC, the Asian youth group. We met at their offices in Edmund Street in the centre of town. We would organise activities. We elected office bearers, we had an agenda, we would hold sporting events, meet the needs of young African Caribbean youngsters, Asian youngsters, white youngsters, anyone who was young. Because we had the backing of the CRC, we encouraged others to get involved. We would offer to support others. If they wanted to set up their own youth group, we saw it as part of our responsibility to help them as well. But the one I was directly involved with was the Asian youth group. We did a lot of activities, we engaged, we met, we discussed what we were going through […] the sort of issues young Asian people were experiencing. You know cultural clashes.

Girls suffered, I think, additional difficulties, additional hurdles, because they were girls. They were expected to stay home, not go out, youth clubs weren’t for them. But my attitude was yes girls can attend youth clubs. And because I was fairly well known in Birmingham at the time, and trusted by a lot of people, I would be asked to go to an Asian girl’s house and say to her parents “Look Uncle and Auntie, trust me, let your daughter come. I take responsibility. She’ll be fine.” And I remember many occasions girls being allowed to attend our activities because I asked and was trusted. And that gave me a lot of satisfaction, you know, seeing our young girls getting involved in activities. 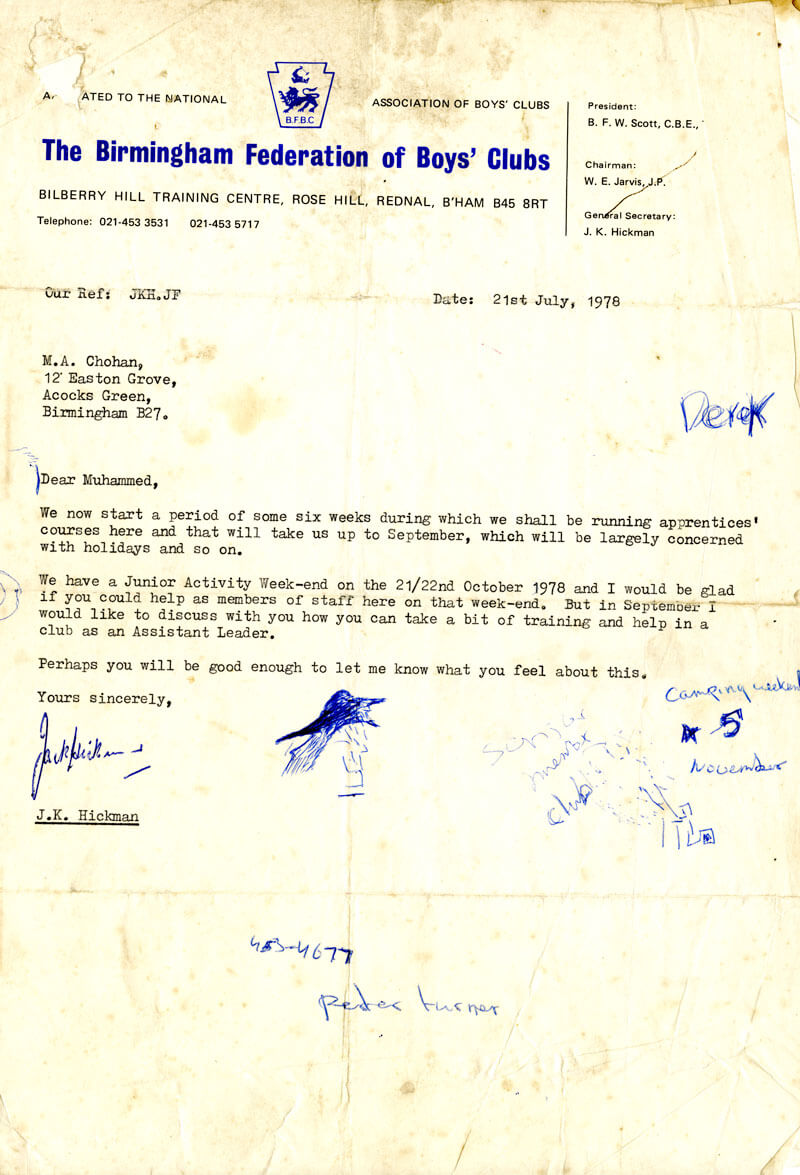 The work he and others did made a big difference to many young people’s lives. At Trinity Arts, he was able to continue this work with youth, undertaking photography projects, cultural programmes, creating opportunities for young Asians and others.