Leaving Nairobi, Kenya, Anita arrived in Britain around 1963-1964 when she was about seven years of age. She recalls settling into the local area and the lifelong friendships that grew:

I was seven and in infant school. I became friendly with one particular girl, Rebecca, who hooked herself onto me. She started taking me home. And I remember the first day, I only know this story now because her mother, who is in her nineties and still alive, and I had lunch a few weeks ago. She said to me – Rebecca was always being looked after by granny, because she lived with them – “I came home, and nanny said to me, ‘There’s a little brown girl playing in the garden all afternoon, and I’ve said it’s tea-time, but she won’t go home.’” I was the little brown girl.

I have this memory of my mum…Because there were six siblings, there was always lots of young people in our house. They were all English people, because that’s where we lived, those were the streets in Selly Oak. I remember my mum just making mountains of roti and daal because all the kids fancied it. It was a novelty. My brother’s friends used to come to the house and have roti.

As we were growing up, it was kind of idyllic. We played in the streets a lot. There were no cars around. We had bicycles that we shared, second hand bicycles.

When Enoch Powell’s ‘Rivers of Blood’ speech happen[ned] in Birmingham. I remember being at secondary school. But there was a real sea-change of attitude in the playground. Boys who used to send me Valentine’s Day cards, would turn around and suddenly I was a Paki and wog. And I remember some of the young people bringing in The Sun, or whatever the paper was at the time, and shaking it in front of me, because they were all reading these papers and picking it up from their parents.

Into the 1970s, Anita became a student and activist making a phenomenal contribution, especially around issues related to women and inequality. Her feelings about being Asian evolved as she grew up:

Because my name was Anita, I could get away with being half white. I remember being quite embarrassed about my mom coming to school wearing a sari and a bhindi, even though I’d never been embarrassed about that before. As a teenager it started to create some embarrassment, but I got over that hurdle pretty quickly, because you start embracing your own culture. 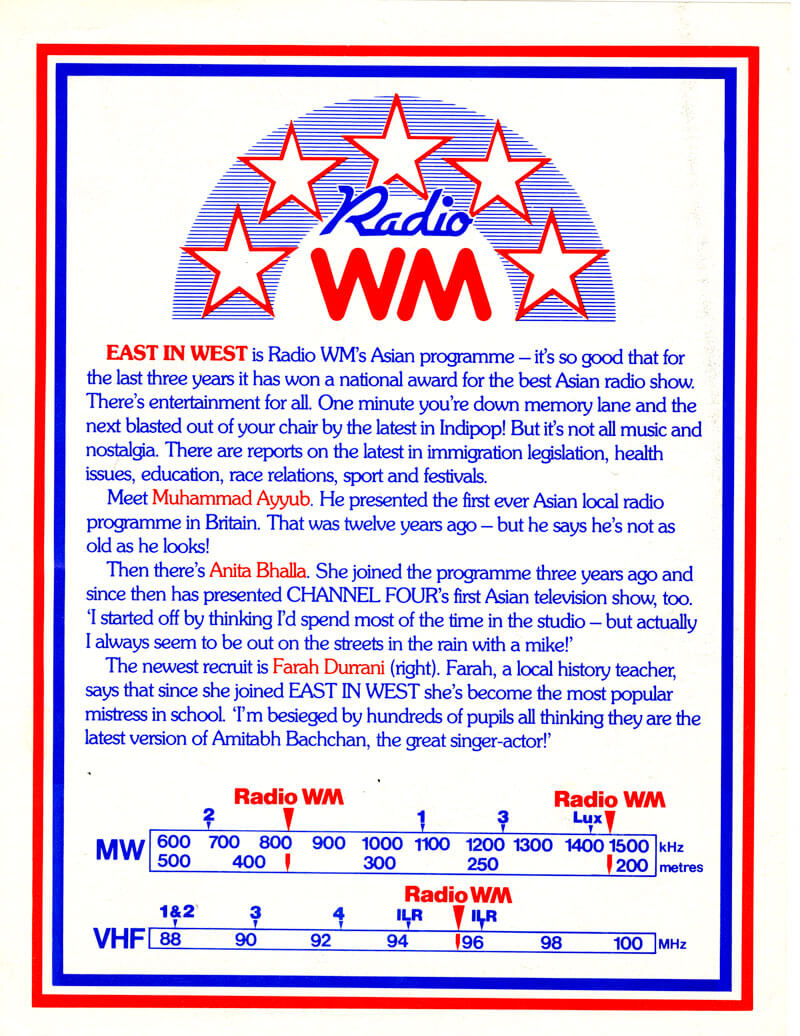 She recalled some of her cultural influences:

I had a large group of English white friends. And then I had a group of [Asian] friends that were older than me. They were my sister’s friends, and my older brother’s friends. I got my Asian culture, if you like, through them. We would go to Indian movies together. We’d go to Soho Road. There was a cinema further down, we would go down and have a samosa. […] Being younger, I would go to events with them. I would be sent to chaperone my sister. It was something I was just doing, not because I rejected anything else. It was just a fun thing to do, and they were a fun crowd of people. They were always in our house, sitting in the garden, listening to music, listening to Bollywood films. We would watch some films at home or go to the cinemas to watch them, at Moseley Road or in Handsworth. The films were things like ‘Geet’ [and] ‘Aradhana’. My sister and all her friends wanted Aradhana saris. And I remember going to Soho Road to the fashion shop; my mom wanted to buy some of the Aradhana saris. There were several. One was where she wore a black sari with a border that is very blue and shiny. I remember going with my mom to get that border, so my sister could stitch it on, so she could have an Aradhana sari.

I was growing up listening to Marianne Faithful, the Beatles, the Rolling Stones and all those old songs of the Sixties. As well as some of [the] very well-known Bollywood songs. My sister was quite clearly embedded in Asian culture, but my eldest brother wasn’t. He was into the Arts Lab [an experimental arts centre and artist collective based in Birmingham, 1968-1982]. He and I used to fight over music that I’d bring from [my friend] Rebecca’s house. He had the most amazing collection of small Elvis Presleys. We always had a rivalry in the house. All of us joined in. Those who supported Cliff Richard. Those who were Beatles fans. Those who were Elvis Presley fans. Half of us were Beatles fans. There always this tension. Are you an Elvis or a Cliff
fan?

Anita reflected on the events that led her into activism and becoming a women’s advocate:

[At university] I trained a as teacher. And I became politically very active there […] The first thing I noticed, this was in 1974, was that there were no facilities for women who wanted to have children. So, we started campaigning for a creche. I became politically very aware of race at the time. I became quite an activist, going on Anti-Nazi League marches, demonstrations, not just in Birmingham, but also in London. We got behind the overseas student’s fees campaign, which we thought was unjust at the time. We [even] occupied the offices of the Director of Education, in Margaret Street in Birmingham, at one point. I think that was in 1976-77. I became vice president of the student’s union.

I was a woman, and a woman of colour. At that time was rare [for a woman] to be a political activist. As women, we started to support each other. So, if we wanted to speak at a student’s union meeting, a big gathering, the women would meet together beforehand so we could prepare ourselves for what we were going to do. Which is really good tactic to have because it the student’s union was very male dominated. And you were picked out because you were pretty. That chauvinism was terribly rife in the student movement of those days. So, we as women got round finding ways of arguing, fighting with that. I discovered there were real issues of [Asian] girls being forced into marriage. Girls being beaten up. Girls not being able to pursue some of their education. And then many of them wanting [to] and leav[ing] home. [At] my house, that I shared with a woman in Leicester, we were having to accommodate young Asian girls, on an ad hoc basis, because they were having issues [at home]. So that led to me starting a project, one of the first Asian women’s hostels in Leicester. It was one of the first in country. […] But the hostel was very controversial in the community. They didn’t want it. The National Front didn’t want it. There was coverage in the press. In one day, we had the National Front smash our offices because I’d been making some statements in the papers […] And then Asian men marched outside demanding that I be sacked for daring to set up this Asian women’s hostel. We carried on. I wasn’t going to give up. The hostel was set up eventually.

Anita returned to Birmingham to continue her activism. In Handsworth, she set up a women’s group and campaigned for women’s rights. She went onto become an established broadcast journalist as well as to continue her work helping communities.